Stacey Macken fought more than eight years for equal pay. Her victory over BNP Paribas SA this week at a London court may encourage a wave of other women to come forward.

In an unprecedented order for a UK investment bank, BNP was told by an an employment tribunal to conduct an extensive audit of its London staff to consider whether men were being paid more than women for the same job.

The bank has chosen to retain “opaque” pay structures, the tribunal ruled, saying that only a wholesale public review that looked at bonuses alongside other compensation could help address whether other female employees were, like Macken, being paid less, it said.

Macken, a prime brokerage product manager, was awarded 2 million pounds ($2.7 million) after the tribunal ruled she’d been a victim of “spiteful and vindictive” bosses. In addition to the payout — one of the largest that the tribunals have ever awarded — the audit may lead to further claims by women at BNP, according to Suzanne McKie, an employment lawyer who specializes in discrimination cases.

The tribunal appeared to want to make an example out of BNP Paribas and didn’t allow the bank any “wriggle room” to avoid a public audit, McKie said. “The potential for a huge number of cases to arise out of this, I think will cause them real concern.”

Women in finance in the UK still make significantly less than men, and the pay gap is especially wide in investment banking, where some of the highest-paid employees work. Men working in finance and insurance made 25% more than women in 2020, a Bloomberg News analysis of government data shows.

BNP doesn’t plan to appeal the ruling. “We at BNP Paribas understand that we fell short in our duty to Ms. Macken,” the bank said in a statement. “Our aim is to ensure that all of our people are treated with the respect they deserve at all times.” 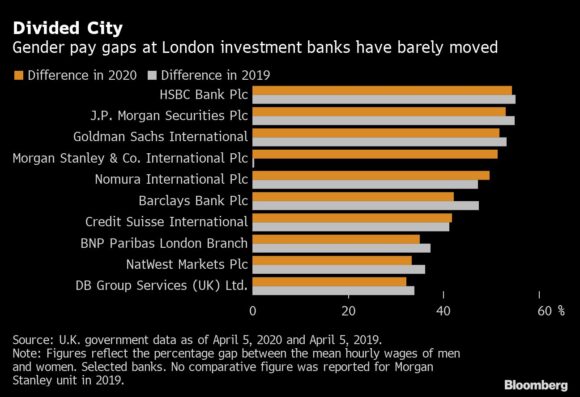 BNP’s latest gender pay data pointed to a 28% gap in median hourly pay, but the discrepancy was far higher with bonuses where the gap was 53.3%. BNP says it plans to have 30% of women in senior office roles by the end of 2023.

Macken, who financed her legal battle with her savings and a personal loan, first raised complaints about pay with her line manager in 2014. But it was only through the litigation that she discovered her male colleague in an equivalent role was paid 25% more than she was.

The discrepancy only got wider as her peer received bonuses and a special allowance, she said. His bonus was more than 5 times Macken’s.

Her line manager, she said, was particularly demeaning by replying “not now, Stacey” whenever she tried to talk to him. He said this so often that Macken’s colleagues made “sarcastic comments” about it, she said.

On one occasion, Macken said she came into work to find a witch’s hat on her desk, placed there by colleagues including the head of the unit who’d been out drinking the night before.

Get automatic alerts for this topic.

Sat Feb 5 , 2022
ORANGE COUNTY, Calif., Feb. 4, 2022 /PRNewswire-PRWeb/ — Direct-to-consumer marketing powerhouse Structured is packing a new punch in the media and acquisitions game, thanks to a new strategic partnership with the digital marketing agency, Agexa. Agexa starts, scales, and partners with performance-driven brands. They specialize in using paid advertising to […]