More than two years into the pandemic, Stanford’s strong endowment performance and a reduction in COVID-related expenses will help counter escalating inflation and global uncertainty while advancing the university’s Long-Range Vision, Provost Persis Drell told the Faculty Senate during her annual budget presentation on Thursday. 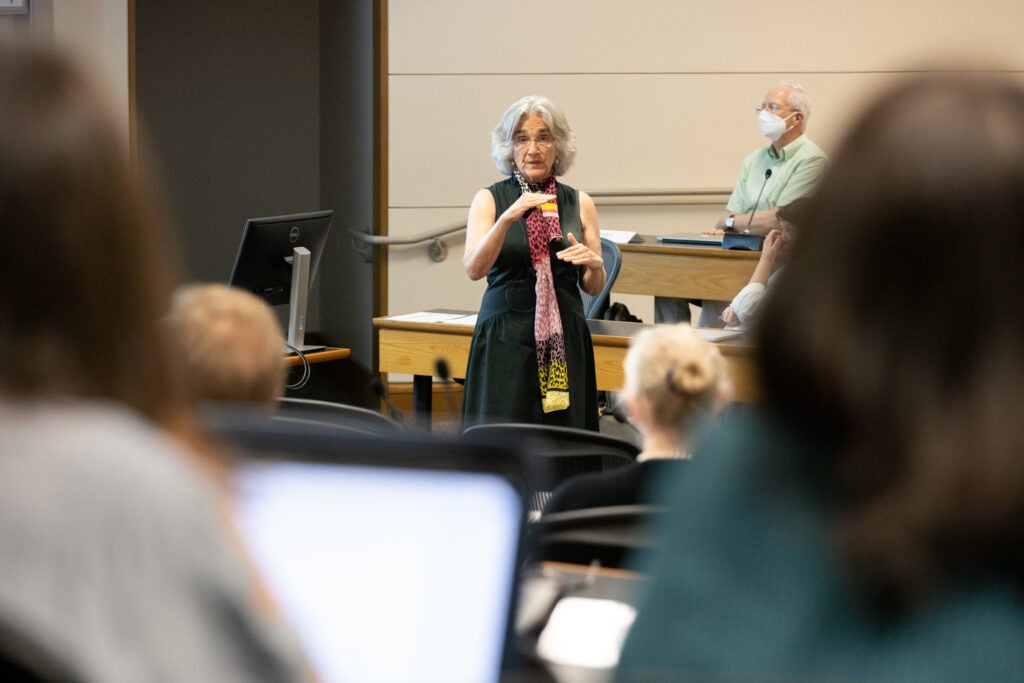 “During this period, having the Long-Range Vision was incredibly helpful in terms of having to make strategically sound decisions,” Drell said. “And we had to make a lot of decisions.”

In remarks to the senate, President Marc Tessier-Lavigne noted recent racist events, including a noose recently discovered on campus as well as “heinous and heartbreaking” mass shootings in Buffalo targeting the Black community and in Orange County targeting the Asian community.

“I know these communities are experiencing deep pain, and I know that many on our campus, particularly our communities of color, are feeling especially vulnerable right now,” he said, “… Our work here at Stanford to build true and meaningful inclusion, and to ensure that all members of our community feel welcome and safe, must and will continue.”

The Faculty Senate also heard the second annual report from the Committee on the University Press during the meeting, and the Steering Committee voted on several items in administrative session.

Stanford’s 2022-23 budget plan has three components: the Consolidated Budget for Operations, which includes all of Stanford’s operating revenues and expenses; General Funds, which is part of the consolidated budget and consists of funds that can be used for any university purpose and support core academic and support functions; and the Capital Budget, set in the context of the multi-year Capital Plan.

Drell began her presentation with a look back at a tumultuous two and a half years that, in addition to a pandemic, saw wildfires, turbulent markets, affordability challenges, and now serious inflation.

Issues around COVID and affordability became “inextricably intertwined in many ways,” she said. And since the pandemic began, Stanford allocated a combined $764.4 million in COVID mitigation, including $81 million on testing, and in affordability initiatives, including a special 3% salary increase for faculty and staff earlier this year.

“I’m extremely proud of a university that invests that way in a time of crisis, in its community,” Drell said, noting there are still more initiatives to come, such as a postdoc transitional housing program that will begin next year.

“Our overriding emphasis in this 27-month period has been on supporting our people in pursuit of the mission of the university, our research, and our teaching,” Drell said.

In discussing the context for budgeting 2022-23, Drell noted “extraordinarily” strong returns on the endowment and “incredibly generous donors” and philanthropy; significant funding needed for infrastructure and new program directions of the university’s Long Range Vision; the continued challenge of affordability; and the troubling implications of inflation.

The consolidated budget for operations is $8.2 billion, with general funds budgeted at $1.8 billion. Total revenues are projected to be up 8% and expenses up 7%.

After keeping tuition flat last year, it was raised by 4%, while room and board increased by 4.25%. Auxiliaries and Service Centers are projected to have a deficit of $39 million, primarily occurring in Residential and Dining Enterprises (R&DE) due to slow growth of retail, conference, and catering operations as well as increased costs associated with the new ResX neighborhood program and inflation.

The 2022-23 budget projects “other income” at $529 million as pre-pandemic activities slowly pick up, such as the Stanford Alumni Association’s continued recovery in travel, study abroad, conferences, and events. Comparatively, revenue on this line was $573 million in 2018-219.

Looking at expenses, the university’s strong salary program, combined with the 3% salary increase earlier this year will help address inflationary pressures. Units are also refilling vacant positions and hiring for new programs. The Cardinal Care health insurance subsidy for graduate students will increase from 50% to 100% to help students and their families manage costs. Total student support, which includes financial aid, postdoctoral, and other graduate support, is projected for the first time at more than $1 billion, up 5.8%.

The consolidated budget anticipates an overall surplus of $250 million, dominated by $246 million of designated, restricted, and research funds.

The provost also outlined the guiding principles for 2022-23 budget planning and resource allocation: supporting our people; supporting research and education; building fundraising capacity in support of the Long-Range Vision; and budgeting a sizable general funds contingency in consideration of global uncertainty and future base budget needs.

Drell noted that budget planning was conservative this year. As the budget was being finalized in March, the markets had already begun to show instability when the war in Ukraine began, she said. “We felt that we wanted to budget a sizable contingency this year in our allocations because we felt that there was turbulence on the horizon.”

However, the budget allocates an additional $52 million of general funds over last year to mission support areas:

The provost also detailed the $664.5 million Capital Budget, set in the context of the $2.6 billion multi-year Capital Plan, which includes the total cost of all projects planned or underway between 2022-23 and 2024-25. Major projects include:

The budget plan will go to the Board of Trustees for approval in June, and a formal document will be made available online following board approval.

Update on the University Press

The Faculty Senate also heard the second annual report from the Committee on the University Press, which was established in February 2020 to advise and report to the senate, and facilitate faculty visibility to and engagement with the Stanford University Press over three years.

“Overall, I think what we’ve learned about Stanford Press is that the more Stanford University Press collaborates with faculty, the better it is,” said committee chair Gabriella Safran, the senior associate dean for humanities and arts in the School of Humanities and Sciences, the Eva Chernov Lokey Professor in Jewish Studies, and professor of Slavic languages and literatures.

In April 2019, Drell announced that while Stanford would continue to support the Press with base funding, it wouldn’t fund a request for five more years of $1.7 million in one-time support, drawing faculty concern. That year, the Press was the subject of several senate meetings and two faculty committee reports. Though different in scope, the reports shared goals of creating new and stronger relationships between the Press, faculty and administration; putting the nonprofit publisher on firm financial footing; and ensuring the Press will thrive.

That June, Drell clarified that the university didn’t intend to close the Press and recommended the formation of a faculty committee to develop a long-term plan to strengthen the Press’ financial and operational model. The provost made additional one-time funds of $1.7 million available to the Press for fiscal year 2020. The faculty committee appointed by Drell completed its report, and Drell announced in October 2019 that she would wait until the Faculty Senate committee provides its recommendations before making any decisions. Additionally, the Press began reporting to the provost rather than the library system, and a new governing board was created.

In sharing what the Committee on the University Press has learned so far, Safran spoke about academic presses generally, and about Stanford University Press in particular. Unlike trade presses, an academic press isn’t expected to make a lot of money and is judged on the intellectual quality of the books it produces, she said. Relative to other university presses, the Stanford University Press is known as being “small, select, flexible, and quick on its feet.” An outside review of the Press commissioned by the governance board recommended spending more money on marketing and leaning into areas of editorial strength.

The Press has hired a marketing director, and the provost has also agreed to fund a three-year acquisition editor position on a trial basis to allow the Press to build on its existing strength in global studies and add more books on sustainability. There is also funding for an update of the press website.

Looking forward, the Press is viable but needs support – both financial and in interactions and collaborations with faculty, Safran said.

The Steering Committee convened in administrative session before the Faculty Senate meeting and on behalf of the senate, approved several recommendations:

In other matters, senators heard memorial resolutions for Jack Remington and Carl Thoresen.

Thoresen, counseling psychologist and professor emeritus at the Graduate School of Education, and by courtesy, psychology and psychiatry, died Oct. 20, 2020. He was 87.

Fri May 27 , 2022
Image: Aniruth/Adobe Stock Organizations of all sizes are increasingly generating and managing large amounts of data, but making sense of all that information can prove difficult. Business intelligence software assists companies in collecting, presenting and analyzing data in ways that help them better understand the information they collect and make […]