WESTERLY —  Police Chief Shawn Lacey, who has served as interim town manager since September, will take the position on a permanent basis starting later this month.

Lacey received the unanimous approval of the Town Council Monday night. The council also approved a five-year contract for Lacey, who has been an officer with the Westerly Police Department since 1988.

Council members were effusive in their praise of Lacey during interviews Tuesday. As a native of the town who demonstrated his managerial skills both running the police department and during his stint as interim town manager, Lacey rendered a potential search for candidates unnecessary, councilors said.

“He’s uniquely situated to run this town. He’s been a police officer for more than 30 years and grew up here, he has relationships across the town, and he understands which disputes  are long standing and which disputes are new. He also has a very calm way about him and he’s very responsive — he returns e-mails and he returns phone calls,” said Town Council President Sharon Ahern.

Lacey, during an interview on Wednesday, said he was both “humbled and honored” by the council’s decision to offer him the position. He will resign from his position as chief of police as the longest serving member in the history of the Westerly Police Department and will be sworn in as permanent town manager on Feb. 28.

About one month after becoming interim town manager following the resignation of J. Mark Rooney in September, Lacey was asked by the council to share his plans for the future. On Tuesday, Lacey said, he asked the council in the fall for a few more months to make his decision. He used the time to speak with his wife and to consider whether he was willing to give up a long and successful career with the police department.

“I did have some reservations. I worked hard to get where I am and I enjoy my job as chief of police,” Lacey said.

In time, Lacey said, he decided he was ready for the new opportunity and challenge of serving as town manager.

The input Ahern received from members of municipal boards, residents, and town employees all reinforced that Lacey was the right choice, she said.

“The feedback is he is a good and clear leader. Across the board it was nothing but A’s,” Ahern said.

The Town Council conducted nationwide searches for the two previous town managers, using a consulting firm to look for candidates. Once Lacey agreed to serve as interim manager, established a record of excellence and indicated interest in the job, Ahern said there was no need to perform a search.

“Why would we spend $30,000 to pay a consulting firm to do a nationwide search when frankly that has not served the town well the last two times in a row,” Ahern said.

“The council worked with Chief Lacey as an interim and recognized his skills and his way of interacting with the public. We saw him in the role and exceeding all expectations. It would have been a waste of effort if we wanted to compare Chief Lacey against another candidate when he has already proven himself,” Duhamel said.

Lacey will start the job with a $170,000 annual salary. The town will contribute 10% of his salary to a 401(k) retirement account and he will receive five weeks of paid vacation, the amount he earned as a longtime town employee. Under terms of the five-year agreement signed Tuesday, Lacey will be due all of the remaining salary, retirement contributions, health insurance and accrued time for the remaining months of the agreement if he is fired for reasons other than ethical or legal violations.

Ahern said a five-year deal, which is longer than previous managers have received, is intended to partially insulate the position from the whims of politics.

“Firing for cause is one thing, but if it is politically motivated, that is what contracts are for — to protect the individual from that type of thing,” Ahern said.

Duhamel said the longer contract would give Lacey time to work with multiple Town Councils and to work with town department heads, some of whom he will have to hire since the human resources director is now vacant. Additionally, Lacey will be responsible for selecting his successor at the police department.

Lacey served as interim town manager several times when Rooney was on vacation. Duhamel said Lacey performed well during those occasions, but never hinted that he might be interested in the job on a full-time basis.

“He reluctantly took on this position. He never once intimated a desire for the job. We all hoped he would take it on. He gave it a lot of thought and I’m thankful he did want to take on this bigger challenge. Westerly is very fortunate,” Duhamel said.

Councilor Philip Overton, who was very vocal in calling for national searches and looking for an experienced town manager with specific credentials in the past, said he was swayed by Lacey’s performance.

“He is very competent and very efficient in a managerial role. I’ve had the opportunity now to work with him directly and anything I ask him to do he gets done immediately. The people like him, he’s very personable, he’s out there in the public, and he cares about the town,” Overton said.

By offering a five-year pact, Overton said the council was able to retain a high-caliber manager in a town where the position has often changed hands after just a few years.

While Lacey lacks the sort of municipal finance background and experience that he prefers, Overton said, he believed the town would be well served by the combination of Finance Director Dyann Baker and Lacey working together.

“I’m confident in the ability of both Dyann Baker and Shawn Lacey,” Overton said.

During contract negotiations, Lacey said, he sought a five-year agreement as protection from potential changes enacted on the basis of politics.

“I’m taking a chance. I could stay on as chief for years depending on who the manager is,” Lacey said.

He also talked with the council about the possibility of setting a new tone.

“I told them they have to think about what they want. There are some towns in Rhode Island that have had the same manager for 20 or 30 years. For some reason Westerly never seemed to grasp that as the political tables have changed things have changed,” Lacey said.

Lacey said he anticipated appointing a new chief of police in the weeks following his Feb. 28 swearing in. Most likely, he said, the job will be filled by a current member of the department.

In accordance with the Town Charter and as other town managers have, Lacey will serve as director of public safety.

The ‘biggest surprise’ was in the theme park business, analyst says

Thu Feb 17 , 2022
Edward Jones Analyst Dave Heger joins Yahoo Finance Live to discuss how Disney’s earnings were boosted by Disney+ streaming subscribers and theme park-goers. Video Transcript – Some relief for shareholders of Disney being expressed this morning– we’re seeing the shares bid higher by about 5%. And that’s after revenue and […] 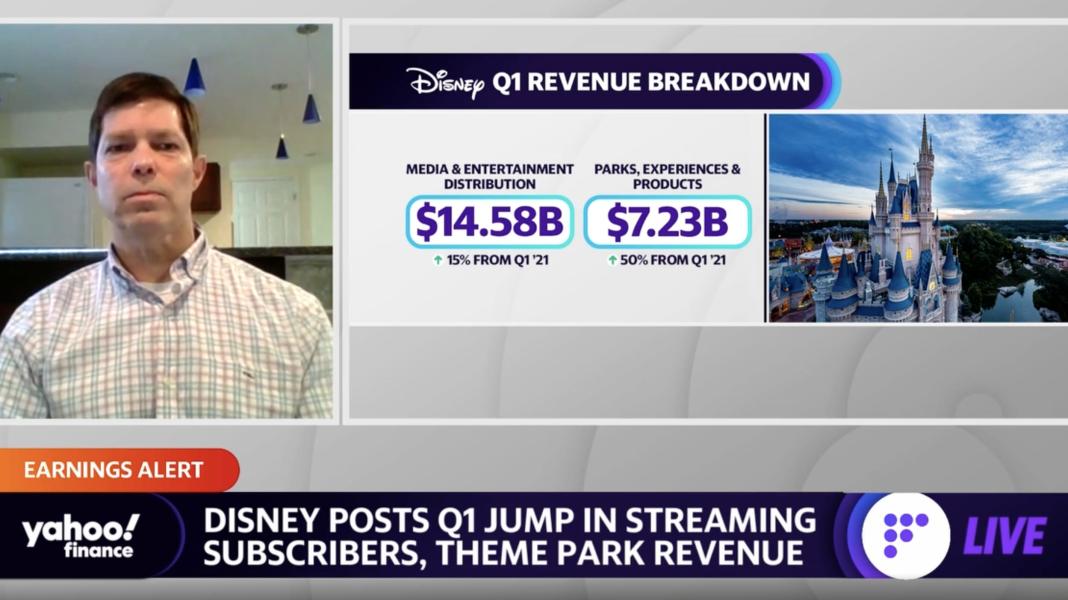