MicroStrategy (MSTR) operates in the business intelligence market, and also holds more than $2 billion in cryptocurrency assets. Even forgetting about the potential returns from bitcoin, the company’s business intelligence division expects to target a market that grows at a CAGR of 11% YoY. If the company signs more partnerships with third-party vendors and offers more deployment options, in my view, future free cash flow could justify a valuation of $1000-$1335. I identified some risks from data protection regulators and certain financial risks. However, the current valuation does not really justify the future of cash that MicroStrategy could generate.

Headquartered in Virginia, MicroStrategy provides business intelligence, mobile software, and cloud-based services. The company also claims to be the largest publicly traded corporate holder of bitcoin. It means that the company will make money from the sale of BI software and the appreciation of BTC:

Let’s start with the software business model, which may not be as much of a disruptor as Bitcoin but is more stable. The company reports recurrent sales to many different industries and operates in close to 27 countries. Also, many of MicroStrategy’s clients have been with the company for an average of 23 years. Bearing in mind this information, we could certainly expect free cash flow in the near future:

Financial investors will also appreciate that around 63% of the total amount of revenue is recurring. Besides, we are analyzing a business model with a gross margin of around 48%-98%. This is like music for my ears:

Base Case Scenario: I Assume That The CEO Successfully Invests In Bitcoin, And The Company Signs More Strategic Alliances With Third-party Vendors

I became quite optimistic about the company’s bitcoin strategies after I reviewed the company’s Board Of Directors and the most recent earnings call transcript. First, the fact that the CEO is mainly in charge of the investments in BTC means that MicroStrategy is really focused on bitcoin:

Second, the company appears to be quite successful while dealing with acquisitions of BTC, digital asset holdings:

We also had another active and successful quarter with our Bitcoin acquisition strategy, executing on our fourth successful capital raise in the past year and expanding our digital asset holdings. Our results in the third quarter are indicative of the multiple ways MicroStrategy is able to create meaningful and unique value for our shareholders. Total revenue in the quarter grew slightly year over year to $128 million. This is a strong performance against an incredibly difficult comp in the third quarter of 2020.

The CEO is quite convinced about the benefits of holding a massive amount of Bitcoin. He noted an increase in sales productivity of more than 30%. The CEO also claimed that the company is inside a virtuous cycle, in which Bitcoin represents the future:

“This translates to an increase in our sales productivity of 31% in the last year and 72% in the last three years. This is a virtuous cycle that we believe we can continue delivering on going forward.”

“So Bitcoin is the future. And everything that happened in the past quarter, I think, is bullish for the asset class and makes us even more optimistic about our business strategy here.” 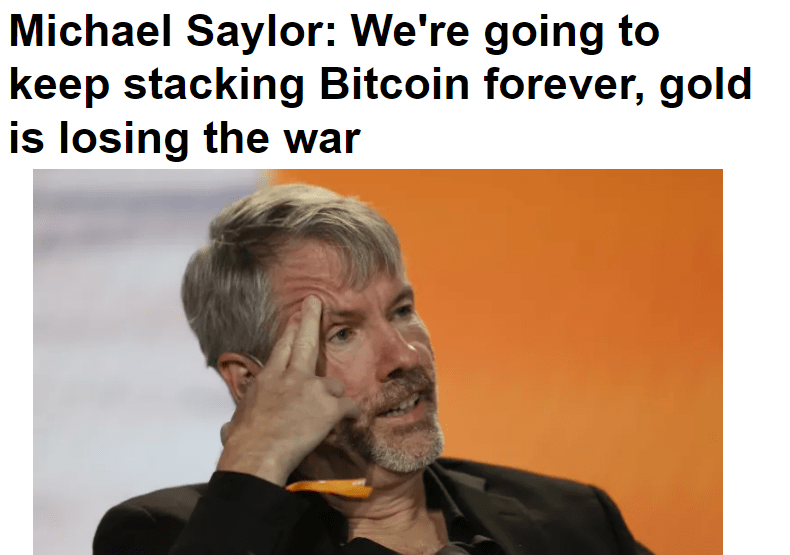 There is more. Under this case scenario, I would expect more strategic alliances with third-party vendors, which will enhance the company’s sales growth. The strategy is not new. The company already works with many resellers and tech companies, which collaborate with their own clients and pay a commission to MicroStrategy:

“Our channel partners are system integrators, consulting firms, resellers, solution providers, managed service providers, original equipment manufacturers (“OEMs”), and technology companies. These firms utilize the MicroStrategy platform for a variety of commercial purposes, and our agreements with them generally provide non-exclusive rights to market our offerings and allow access to our marketing materials, product training, and direct sales force for field-level assistance.”

In this case scenario, I assumed that management will successfully differentiate its offerings from that of competitors. If the company offers more deployment options and more analytical, mobility, data discovery, and visualization capabilities, sales growth will increase because the target market will also increase.

Bearing in mind the optimism of the CEO and my assumptions, I believe that sales growth of 6.4% appears conservative. I also assumed an EBITDA margin of 21%, which is pretty much close to what other investment analysts are pointing out. The result includes 2030 sales close to $885 million, and 2030 EBITDA of around $185 million:

In the past, MicroStrategy traded at 180x-60x FCF, so I believe that using an exit multiple of around 105x appears quite reasonable: 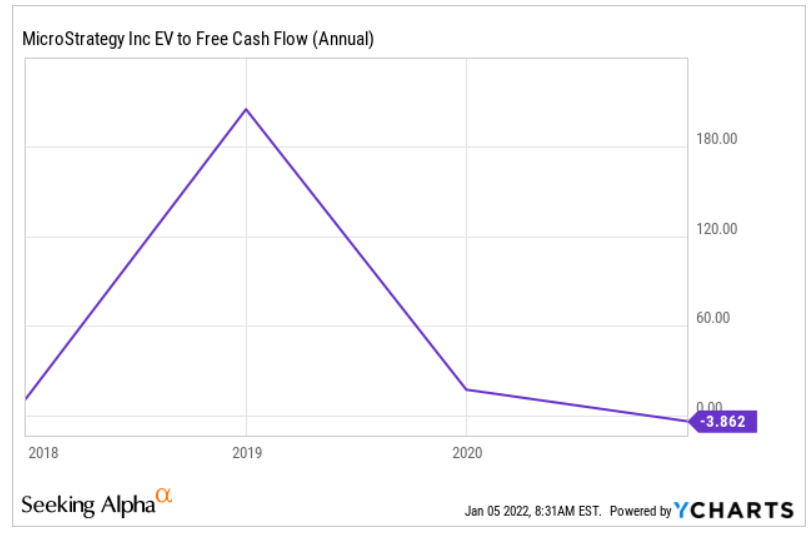 Other investment analysts also reported a target price close to $1000-$900. So, with the stock trading at around $545, under the conditions depicted in this case scenario, MSTR would be a buy:

I dislike the fact that MicroStrategy obtained revenue only from the sale of a unique software platform. For whatever reason, clients may not demand the company’s platform. In this case scenario, the company wouldn’t have other products for sale. It means that in terms of diversification, MicroStrategy is not well prepared:

MicroStrategy stores a lot of data from clients and employees, which means that the company may be subject to data protection regulations. If the European Union or the US Government decide to increase the level of protection of personal data, the company’s operations may become more complicated. As a result, I believe that the company’s FCF margins may decline:

“In addition, the types of data subject to protection as personal data in the European Union, the United States, and elsewhere have been expanding. In recent years, the collection and use of personal data by companies have come under increased regulatory and public scrutiny, especially in relation to the collection and processing of sensitive data, such as healthcare, biometric, genetic, financial services, and children’s data, precise location data, and data regarding a person’s race or ethnic origins, political opinions, or religious beliefs.”

That’s not all. Shareholders may suffer fines from governments all over the world. For instance, the European Union could impose fines of up to 4% of the total global annual revenue. In this case scenario, we could expect a significant decline in revenue growth:

“In the European Union, the General Data Protection Regulation (“GDPR”) took effect in May 2018. GDPR establishes requirements regarding the handling and security of personal data, requires disclosure of data breaches to individuals, customers, and data protection authorities in certain circumstances, requires companies to honor data subjects’ requests relating to their personal data, permits regulators to impose fines of up to €20,000,000 or 4% of global annual revenue.”

Finally, if we also use an effective tax rate of 25% and capital expenditures of $20-$30 million, the unlevered free cash flow would stand at $115-$145 million:

If the company suffers from data protection regulations, and the demand for its software declines, some shareholders may sell shares. As a result, I would be expecting a significant increase in the cost of equity and cost of debt. With this in mind, I assumed a WACC of 10.5%, which would lead to an implied share price of $475:

If MicroStrategy Grows Like The Business Intelligence Market, The Target Price Could Stand At Close To $1330-$1335

The experts believe that from 2021 to 2025, the business intelligence market could expand at a rate of 11% YoY. In the last presentation to investors, management noted that the company’s software is the logical choice for clients in looking for BI replacement. With this in mind, in my view, expecting that MicroStrategy’s sales growth is close to that of the market is reasonable:

With more clients willing to use BI software, management may perhaps increase its prices, which may lead to an increase in the EBITDA margin. With all these factors in mind, I used sales growth of 10.5% and an EBITDA margin of 25%:

If we assume a WACC of 8.25% and exit multiple close to 95x FCF, the implied market capitalization would be close to $13.285 billion. I also assumed that the company would sell some equity to pay more sales personnel so that the share count stands at 10 million. Finally, the stock price would be equal to $1330-$1335. In my view, this case scenario is a bit unlikely:

In the last quarterly report, the long-term debt was equal to $2.153 billion. If the company sells all of its bitcoin, I believe that management could pay for some of its debts. With that, the company’s long-term debt is not small, so there are some risks. In my view, investors may worry about the debt from 2025, when some of the company’s convertible debt matures:

With more strategic alliances with third-party vendors and successful investments in Bitcoin, MicroStrategy will most likely see an increase in its revenue. The company is also targeting a market that is expected to grow at a CAGR of 11%. In the best-case scenario, if MicroStrategy grows like the target market, future FCF could justify a valuation of $1330-$1335. In the worst-case scenario, which I believe is less likely, my DCF model resulted in a valuation of $475. Yes, there are some risks coming from the company’s financial obligations and emerging data protection regulations. However, in my view, the upside potential appears more significant than the downside risks. I will be buying shares at the current price mark.