The full “smart city” vision for the future is finally coming into focus. SWIFT Rails, an innovative transit system with zero emissions and cost-effective operations, is sure to be a part of it. Fresh off their latest round of crowd fundraising on Wefunder, the company is poised to bring a new mode of transportation to a population desperately in need of a change.

SWIFT Rails claims to be five times faster and forty times cheaper than conventional light rail, and that’s just the economic benefit. The world, and more specifically the United States, is running out of room to build roads. On our existing roads, Americans collectively spend 8.8 billion hours a year stuck in traffic. And transportation is a growing source of emissions at 5.8 gigatons of carbon globally each year. The nation and the planet are at serious risk.

Sci-Fi fans have been expecting this for decades. The all-time greats like Asimov, Bradbury, and Heinlein never featured internal combustion vehicles in their novels. Their vision of the future didn’t include them. With Swift Rails, ours doesn’t need to either. CEO Kevin Neumaier and the rest of the Swift Rails team may have a much smarter alternative for us.

Highways and traditional railways break neighborhoods in half, pollute surface water, reduce air quality, and kill wildlife. SWIFT Rails maintains that it doesn’t do any of that. Their ultra-light-rail tracks are elevated twelve to fifteen feet above the ground, enough clearance for any creature that walks crawls, or flies. They also take up 300 times less ground space than a road or railroad track.

The power source for SWIFT Rails is a renewable energy-charged battery, so there are no carbon emissions and no danger to surface water or wildlife. For riders, that means a smooth, guilt-free ride with a great view of a healthier world below. There’s no traffic, no packed train cars, and no delays in getting to your destination, meaning there’s no stress when using SWIFT Rails. 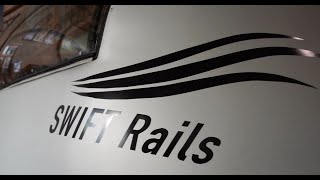 SWIFT Rails might be unfamiliar to you, but it’s by no means a new company or concept. CEO Kevin Neumaier first presented the idea at a UN Climate Meeting in 2009. Within a year after that, he had connected with Jim Enright and they were building prototypes in Kevin’s backyard. They’re now on Version 4.0 of the system and ready to roll it out for mass adoption.

SWIFT Rails Fits Perfectly into Smart Cities of the Future

According to Yahoo Finance, the addressable market size for smart city technology is projected to exceed $1.5 trillion by the year 2030. The compound annual growth rate (CAGR) over the next ten years is expected to hit 15.5%. That’s how pressing the demand is for technologically advanced, environmentally friendly living spaces. Transit will be a big part of that.

SWIFT Rails is affordable now for small cities, tourist destinations, and large campuses. Their model of personal conveyance vehicles for one, two, or four passengers works well in environments where driving is prohibitive and parking is limited. SWIFT Rails cars are called with a mobile app and take you directly to your destination with no stops in between.

Another pressing issue in traffic-congested cities is safety. Traffic accidents are the leading cause of death for people ages five to twenty-nine. According to the World Health Organization, 1.35 million people die every year from traffic-related accidents. With Swift Rails, that number will go to zero. There’s no traffic, no pedestrians or cyclists in danger, and no drunk drivers.

SWIFT Rails is Partnering with Cities, States, and Government Agencies

Major cities like New York, Singapore, and London have adopted the smart city model and are attempting to create new green spaces that can offset heavy traffic congestion and carbon emissions. With SWIFT Rails, they could eliminate the automotive traffic, connect public transit and rideshare stops, and enhance their existing infrastructure. 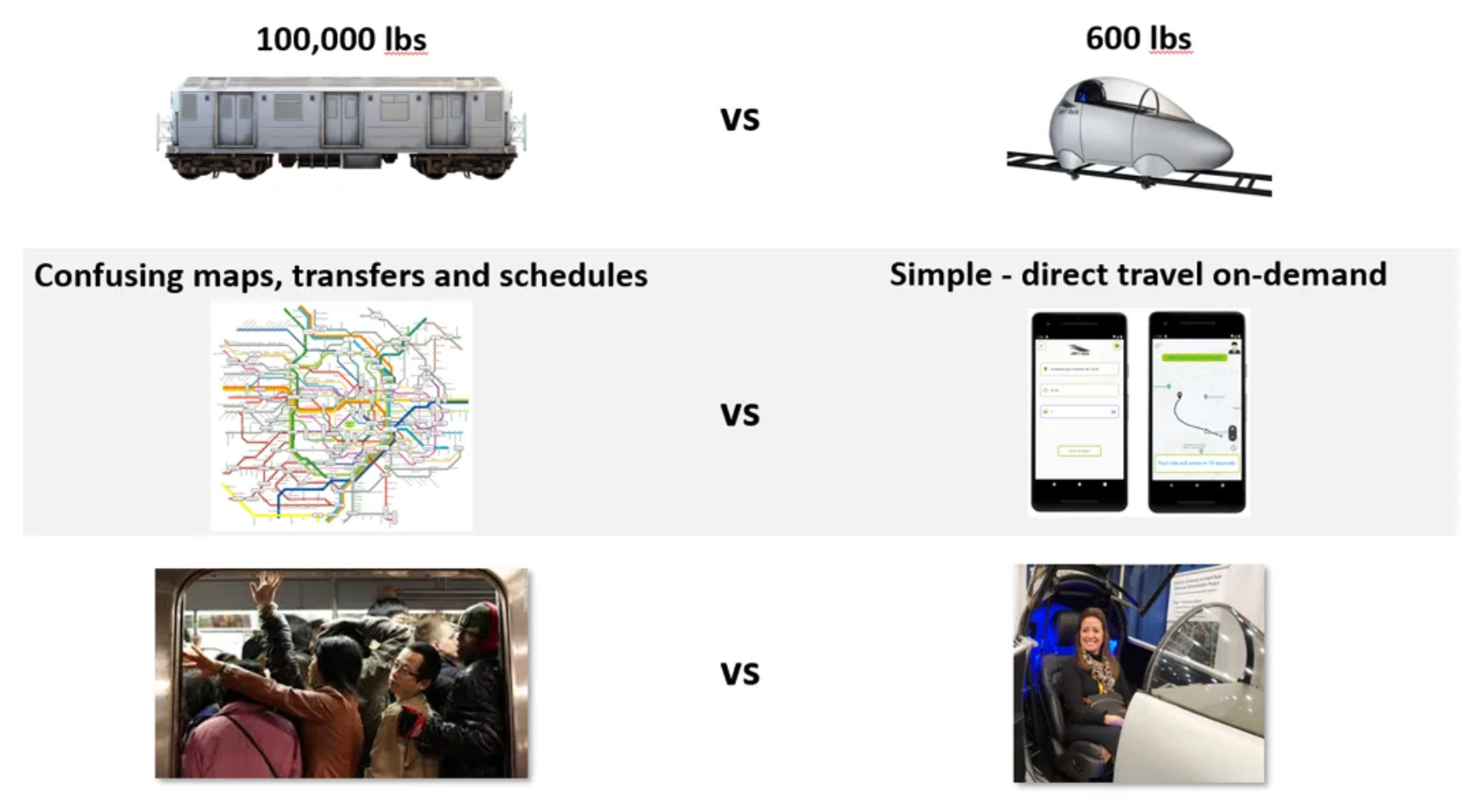 As SWIFT Rails moves to the next phase in its development, Kevin Neumaier will be looking to partner with cities, states, and government agencies to build environmentally-friendly transit systems that fit into the smart city model. This is the dream that he spoke about at the United Nations thirteen years ago. It is now on the cusp of becoming a reality.

The cost of building a SWIFT Rails transit system is forty times less than building a traditional light rail. The materials and components for any project taken on in the United States will be sourced and obtained domestically. That means the transit system will be fully “Made in the USA.” Railroads and highways use imported materials.

Local sourcing also means lower costs and more job creation in the areas where SWIFT Rails will operate. The system is automated, but the building, maintenance, and IT operations all offer high-paying employment opportunities. The SWIFT Rails system itself, due to its comfort, speed, and efficiency, will increase professional productivity for its riders.

Investors and partners are what will make this dream of a better transit system come true. Swift Rails has already made significant progress in early seed rounds of fundraising and have currently raised over $96,000 through their latest crowdfunding campaign on Wefunder. In total, Swift Rails has raised around $448,000 through crowdfunding efforts. They also received a $200,000 grant from the New York State Energy Research & Development Authority (NYSERDA).

The development team has a working outdoor test track and vehicle prototype that they’ve run over one thousand rider touch tests on. The sales team has a growing sales pipeline with roughly $200 million in good to excellent opportunities, including multiple projects in the UK and Europe. Based on these factors alone, Swift Rails seems to have a bright future.

Elected officials, leading universities, and major US transit companies are buying into the concept also. SWIFT Rails has leveraged that support into professional partnerships to enhance key capabilities. Some notable names on that list are Wendel Development, Zero Motorcycles, and Clarkson University. Look for more to jump on board soon.

Spotlight Growth is compensated, either directly or via a third party, to provide investor relations services for its clients. Spotlight Growth creates exposure for companies through a customized marketing strategy, including design of promotional material, the drafting and editing of press releases and media placement.

All information on featured companies is provided by the companies profiled, or is available from public sources. Spotlight Growth and its employees are not a Registered Investment Advisor, Broker Dealer or a member of any association for other research providers in any jurisdiction whatsoever and we are not qualified to give financial advice. The information contained herein is based on external sources that Spotlight Growth believes to be reliable, but its accuracy is not guaranteed. Spotlight Growth may create reports and content that has been compensated by a company or third-parties, or for purposes of self-marketing. Spotlight Growth was compensated one thousand five hundred dollars cash for the creation and dissemination of this content by the company.

This material does not represent a solicitation to buy or sell any securities. Certain statements contained herein constitute “forward-looking statements” within the meaning of the Private Securities Litigation Reform Act of 1995. Such statements may include, without limitation, statements with respect to the Company’s plans and objectives, projections, expectations and intentions. These forward-looking statements are based on current expectations, estimates and projections about the Company’s industry, management’s beliefs and certain assumptions made by management.

The above communication, the attachments and external Internet links provided are intended for informational purposes only and are not to be interpreted by the recipient as a solicitation to participate in securities offerings. Investments referenced may not be suitable for all investors and may not be permissible in certain jurisdictions.

Spotlight Growth and its affiliates, officers, directors, and employees may have bought or sold or may buy or sell shares in the companies discussed herein, which may be acquired prior, during or after the publication of these marketing materials. Spotlight Growth, its affiliates, officers, directors, and employees may sell the stock of said companies at any time and may profit in the event those shares rise in value. For more information on our disclosures, please visit: https://spotlightgrowth.com/disclosures/

Wed Apr 27 , 2022
Prices are rising and the predictions don’t look good. Inflation soared over the past year at the fastest pace in 40 years, and food prices, which already saw a 6.8% jump from January 2021, are expected to increase another 3% to 4% this year, according to USA TODAY and the […]