Some shares that are part of billionaire Gautam Adani’s conglomerate took a beating on Tuesday as investors adjusted their holdings to reflect changes in the composition and weighings in the MSCI India Index, according to an analyst who publishes at Smartkarma.

Adani Green Energy Ltd., the group’s biggest firm by market value, led the rout, plunging a record 12% in trading volume about nine times the average of the past three months. Adani Total Gas Ltd. Adani Transmission Ltd. and Adani Power Ltd. fell by at least 5% each.


Most of these stocks extended losses in early Mumbai trading on Wednesday.

MSCI Inc. published additions and deletions to its global indexes last month but the announcement didn’t detail changes to the weightings of individual stocks in its indexes. The changes took effect at close of trading on Tuesday and analysts said Adani Green’s weighting in the MSCI India Index was cut as it admitted new stocks. Emails to the Adani group and MSCI went unanswered outside business hours.

The moves underscore how shares of Adani’s companies are vulnerable to outsized swings, compounded by lower liquidity relative to those of stocks such as Reliance Industries Ltd., which backs the fortune of multi-billionaire peer Mukesh Ambani.

“Adani Green soured sentiment for the group’s stocks as its weighting reduction in MSCI India Index took effect,” Brian Freitas, an analyst for independent research platform Smartkarma, said by phone. “Adani Power saw profit taking as it had run up ahead of its inclusion in the same index.” 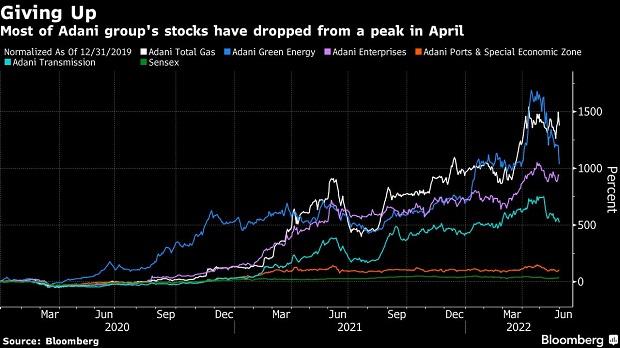 A share rally in the companies of the ports-to-power conglomerate had taken Adani ahead of Ambani as Asia’s richest person earlier this year. While Adani remains among the top-10 richest people in the world, his wealth dropped by $3.7 billion yesterday, the Bloomberg Billionaires Index shows.

Following the change in Adani Green’s weight in the MSCI India Index, the stock could see outflows of about $220 million, Abhilash Pagaria, an analyst with Edelweiss Alternative & Quantitative Research, wrote in a note last month.

Lack of analyst coverage and high valuations on some of the group’s stocks such as Adani Green, Adani Total Gas and Adani Enterprises have baffled some market participants in the past.

A small number of foreign funds own a significant portion of Adani Group shares, posing concentration risks, said Nitin Chanduka, a strategist with Bloomberg Intelligence. “Having a large chunk of shares held by a few funds also reduces the effectiveness of the public float, leaving stocks prone to asymmetric volatility.”

“Its very difficult to get any information as there are hardly any analyst covering some of the group stocks,” he said. “Valuations versus peers show heaven and earth difference.”

The Rise of Adani

Business Standard has always strived hard to provide up-to-date information and commentary on developments that are of interest to you and have wider political and economic implications for the country and the world. Your encouragement and constant feedback on how to improve our offering have only made our resolve and commitment to these ideals stronger. Even during these difficult times arising out of Covid-19, we continue to remain committed to keeping you informed and updated with credible news, authoritative views and incisive commentary on topical issues of relevance.

We, however, have a request.

As we battle the economic impact of the pandemic, we need your support even more, so that we can continue to offer you more quality content. Our subscription model has seen an encouraging response from many of you, who have subscribed to our online content. More subscription to our online content can only help us achieve the goals of offering you even better and more relevant content. We believe in free, fair and credible journalism. Your support through more subscriptions can help us practise the journalism to which we are committed.

Wed Jun 1 , 2022
Originally from Ventura County, Calif., Jason Evans spent his summers working on his family’s roughly 1,000-acre farm. They grew various crops such as tomatoes, lima beans, peppers, jalapenos and more. “Basically, stuff that goes into salsa,” Evans says with a laugh. Evans explains that after seeing his family’s stressors on […]